Welcome to Marsha's Maple House
a little story about us 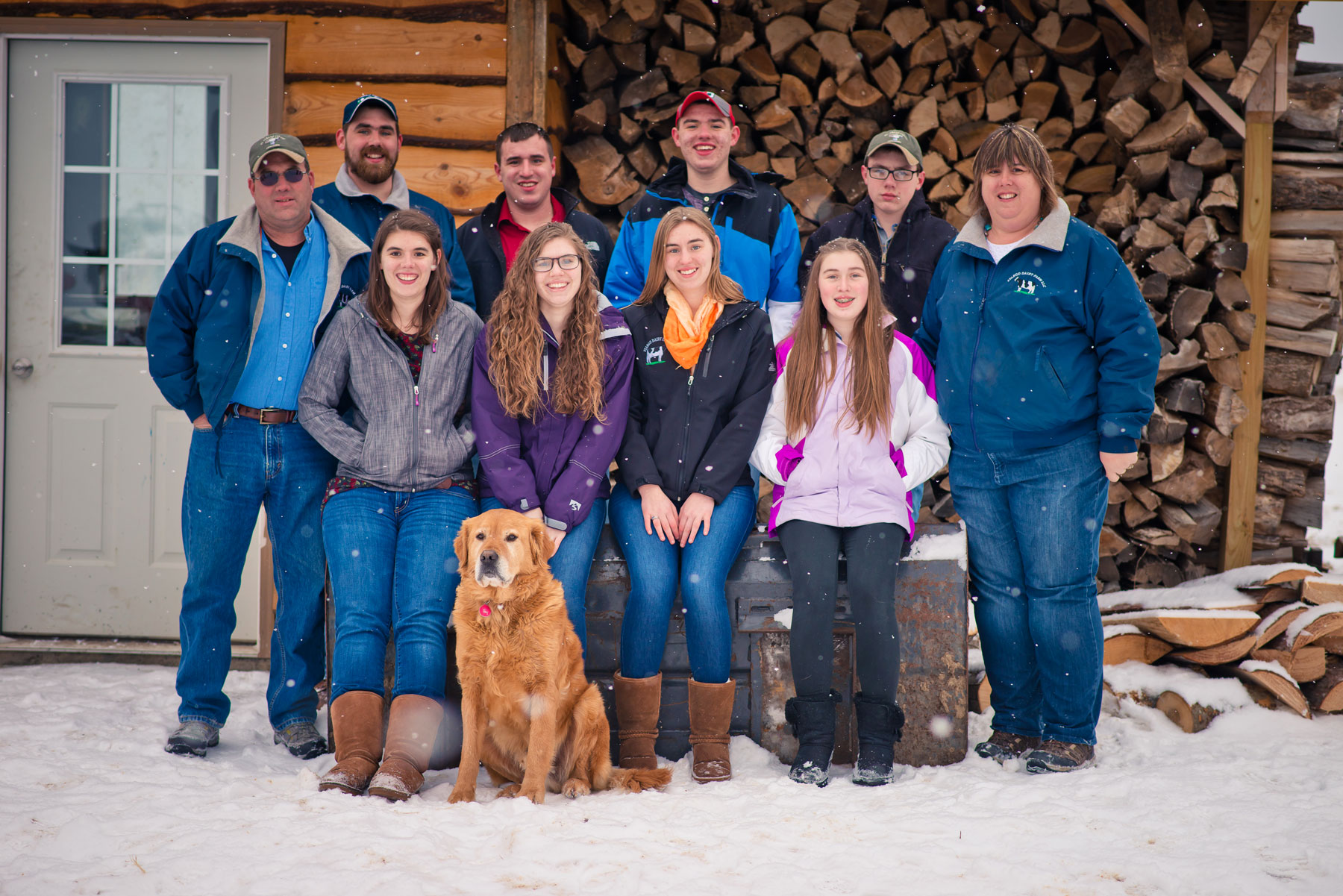 We all have a story: Something that tells the details of our past to explain the here and now, something that makes us unique and something that makes us remembered. We are the Gokey Family: two parents, four girls, four boys. Steve, Marsha, Andrew, Amanda, Adam, Alison, April, Austin, Alex and Amy and this is OUR story.
1992: We started as a young, childless couple and started a first-generation dairy farm in Trumansburg, NY.
1997: We moved four kids and the dairy farm to Malone, NY where we currently reside.
Fast forward…
2015: Many years and eight kids later, we decided to venture into maple syrup production as a way to diversify. That January, our first taps went into a plot of maple trees we owned and at first, we did not have the facility or equipment to boil the sap into maple syrup. We made some agreements with some family friends who had a sugarhouse and ta da! we were on the road to making our very own pure Northern New York Maple Syrup!

2016: The summer of this year, we constructed our very own sugarhouse and purchased equipment to boil our own sap on-site.

2017: This was the first year that we boiled in our own sugarhouse and the end result was 300 gallons of maple syrup from the newly constructed “Marsha’s Maple House”.

2018: We became a member of the New York State Maple Producers Association and we also worked with a designer to create a logo for our new business. Most importantly, we signed a lease for a neighboring sugarbush, bringing us to approximately 6,000 taps!

2019: We switched our wood-fired evaporator over to fuel oil, purchased a new Reverse Osmosis system, installed an automatic draw-off system, purchased a brand new 7,000 gallon collection tank for sap and rented another sugarbush bringing us to a total of 9,000 taps for this year.

2020: So far this year, we have made a lot of exciting changes! We have recently added onto our existing sugarbush and purchased a sap house to ease in sap collection in the woods. We have also built onto our sugarhouse so our holding tanks for sap are enclosed and under cover.

This is a story that will continue to be written for years to come. This is OUR story.

Maple Syrup is a very good source of vitamins and minerals.

Native North Americans were the first to recognize Pure Maple Syrup as a source of nutrition and energy. Researchers have since shown that Maple Syrup has a higher nutritional value than all other common sweeteners.

Pure Maple Syrup is not only a wholesome natural flavor, but it contains no additives and has one of the lowest calorie counts of the common sweeteners.

Running sap is all about physics

When temperatures start to climb in the spring, the water-sugar mixture absorbed by roots expands, forcing its way from the roots up through the tree.

It Comes in Several Color-Based Grades.

In the U.S., Grade A syrup is lighter in color while the Grade B variety is considerably darker and used largely for baking.

What’s Fake Maple Syrup Made With? You Might Not Wanna Know.

Brands like Aunt Jemima and Mrs. Butterworth use such ingredients as high fructose corn syrup, cellulose gum, and caramel coloring to create an inexpensive substance which only somewhat resembles the genuine article.
Marsha's Maple House Copyright © 2021 TM All Rights Reserved.   Powered by Growtrends

Select the fields to be shown. Others will be hidden. Drag and drop to rearrange the order.
Click outside to hide the compare bar
Compare
Wishlist 0
Open wishlist page Continue shopping